You may already know that the chorus is from the well-known and much loved song written by the poet and lyricist known for writing in all genres and moods; Majrooh Sultanpuri. Composed by Rahul Dev Burman and sang by the beloved Mohammed Rafi and Asha Bhosle, it forms part of the soundtrack for the first ever Masala film in the Indian Bollywood industry, released in 1973; Yaadon Ki Baaraat ‘Deluge of Memories’. [Click here to see the song featured in the film]

Asha Bhosle opens the song by singing chura liya hai tumne jo dilko in a sort of overwhelmed and perhaps even defeated tone, yet one with a feeling of satisfaction and recognition. This sentiment comes through in the line that follows immediately; nazar nahin churaana sanam ‘My beloved, don’t look away’. 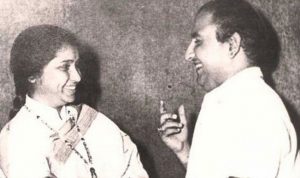 There is a type of metaphorical meaning in chura liya hai tumne jo dilko and some might go further to say a rather dramatic and cheesy one too. But no doubt a metaphor that is universally understood at some level. Whether you have a Bollywood palate or not, the metaphor gets your attention and dependent on your palate, it will be followed by giggles and/or a lingering thought of what not.

Metaphors are an obvious example of language creativity, but what about language creativity that is woven deeply into the grammar that contributes to the meaning of the sentence too? The deeper meanings of any type of sentence is intimately connected to the type of words that are in the sentence; the ordering of the words; and the grammar of the words. In dissecting and analysing the meaning of this verse, we can see rich and intricate patterns that contribute to the overall playful meaning of chura liya hai tumne jo dilko. Let’s begin with the word order.

The typical word order in Urdu-Hindi and sister languages like Punjabi and Pahari-Pothwari is SOV; subject + object + verb(s). For instance, in;

Javeria is the subject, Salim is the object and maara tha are the verbs. While in English, the typical word order is SVO;

Chura liya hai has a VSO word order which is in contrast to the typical SVO order found in Urdu. However with some shuffling around, we can put the chorus into the standard Urdu-Hindi word order. You can compare the two types of word orders here;

Why the atypical word order? Any deviations from the typical order are used to mark a special meaning and are generally associated with shifts in prominence, emphasis, and semantic effects.

For native speakers, it is intuitive knowledge that the chura liya hai tumne jo dil ko sounds more intense, dramatic, and playful than tumne jo dilko chura liya hai. Having the verb at the front emphasises the stealing metaphor-type meaning and gets one’s attention immediately. While the standard word-order can be interpreted as more serious than the atypical word order, and thus less playful and dramatic.

Such flexibility in word order is very common for Urdu-Hindi and closely related languages like Punjabi and Pahari-Pothwari because they have lots of morphology. Morphology analyses the structure of words and parts of words. Crudely speaking, in Urdu there are lots of parts to analyse, such as case markers, which are integral to how we interpret events.

Case marking gives you information about what the nouns are doing; it can tell you who is hitting who. Let’s take the sentence below as our example;

Native speakers learn and internalise the meaning of these case markers and so whatever the positioning of the nouns in the sentence; one knows the grammar rules and consequently knows who is hitting who. Such grammar knowledge is integral to how we understand, interpret, and explain the events of the world around us.

Since the word order is different from the standard word order in chura liya hai tumne jo dil ko, how does one know what has been stolen and who stole it? We know from our knowledge of the grammar rules of the case markers -ne and -ko.

“You have stolen my heart”

The last part of the word order is the verb, but there isn’t just one verb, there is a sequence of verbs; in (i) chura, (ii) liya, and (iii) hai. The first two verbs chura liya go together as they have one meaning ‘to steal’, but they are made up of two verbs. This is referred to as a light verb construction in linguistics.

Light verb constructions are a common feature of languages in South Asia, but they are also found in English too*;

Have a rest, have a read, have a cry, have a think

Take a sneak, take a drive, take a walk, take a plunge

Give a sigh, give a shout, give a shiver, give a pull, give a ring

The verbs take, have, and give can be said to be semantically light in comparison to the full/lexical verb. For example, one does not physically give a shout, but rather one shouts, whereas in she will give him the book, entails she will physically give the book.

In chura liya; chura comes from churana ‘to steal’ and li is one of the three verb forms of ‘take’ – le/li/lI. The literal meaning of chura liya is ‘stealing take’. However, there is not a literal taking of the stealing; this sounds semantically odd. Rather, liya has considerably reduced semantics in comparison to its use as a “normal” verb like in usne coffee liya “he/she took the coffee”.

The meaning of liya in chura liya is subtle and light. There is certainly a sense of taking, but not of the normal usage of it, and in fact the overall meaning is not related to taking, but with stealing. However, they do complement each other: stealing and taking go together – something has been taken when you steal.

There are many more examples of light verb constructions with liya, which can be categorised as semantically similar because the subject of the verb gets something. For instance, in verbs like pakar liya ‘grabbed’, kha liya ‘eaten’, mAn liya ‘accepted’, and dekh liya ‘seen’ – the person gets something from the grabbing; eating; accepting, and even in the seeing. The grab-type, perception, mental gain, and ingestive verbs are similar to the stealing verb not only in that the person gets something, but there is a lack of control from the person or thing that undergoes the stealing; eating; grabbing; and seeing.

This sense of ‘lack of control’ is further emphasised by the missing mera ‘my’. As one would typically say chura liya hai tumne merE dilko, but the possessive meaning is implied even though in the translation we have it as “You have stolen my heart”. However, the literal translation is “You have stolen this heart (of mine)”; the referential meaning is conveyed via jo ‘this’. This translation emphasises that the heart is now in possession of the one that stole it so much so that they can no longer call it their own.

The meaning that love has struck them both and robbed their hearts; a force beyond their control is conveyed on every level of language, from the words themselves to the word order and the intricate grammar parts that go with the words. All of this contributes to the playful meaning of chura liya hai tumne jo dilko. Such playfulness is of course found outside of Bollywood too, in the real world we use language in the same way; creatively and unconsciously playing with ways to convey and decode our reality.

About the Author: Farah Nazir

Farah is a UK-based linguist (South Asian languages), editor, writer, and academic writing coach. She is currently playing with ways to disseminate her PhD and current research to an academic and public audience in a meaningful manner.