Do You Recognize This Prayer Mat?

Do You Recognize This Prayer Mat?

If the answer is yes, you either are the owner of this gem or you used one just like it growing up. It either belonged to your parents, grandparents or it was gifted to you by someone special. It probably came from Saudi Arabia, when family members or friends returned from the Umrah or Hajj pilgrimage.

The red Prayer Mat belonged to my paternal mother, my Dadi. According to Phupu (my maternal aunt), my Dadi had bought it from a merchant in Lenasia, – a predominantly Indian neighborhood in the South African city of Johannesburg. The merchant would go from door to door, selling the latest Prayer Mats and kitaabs (religious books). When my Dadi passed away, my mother inherited the this Prayer Mat as a gift. Growing up, I had always been aware of this red, velvety, Prayer Mat that used to be at the bottom of the Prayer Mat pile. No one used it besides my Dad, occasionally. It smelt like moth balls and was extremely thin. 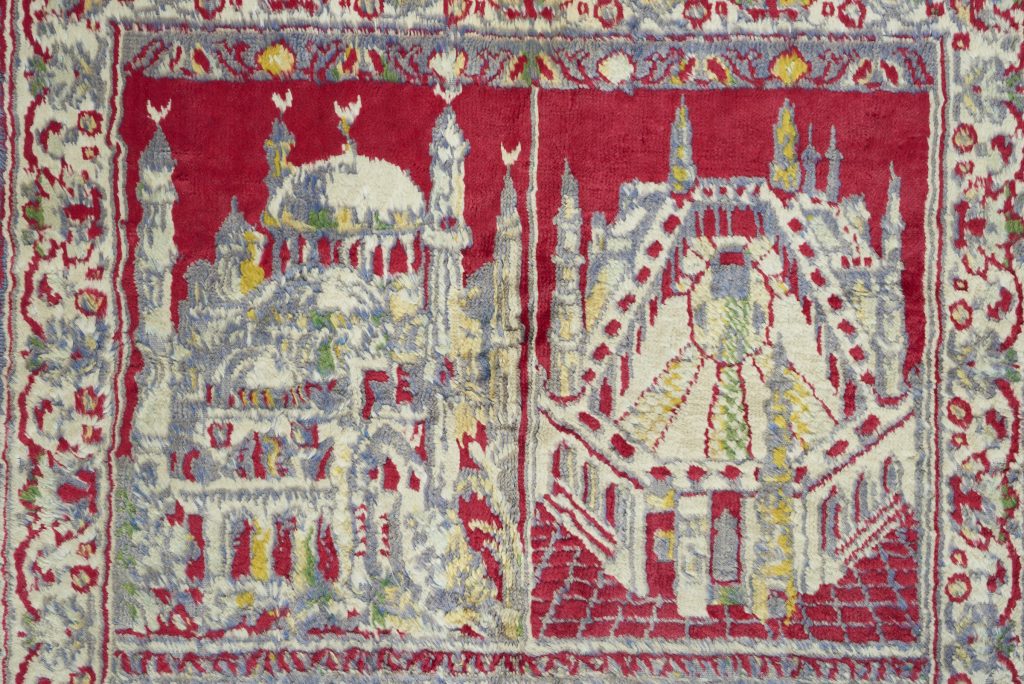 So how did this seemingly mundane object become the topic of my honours thesis? It started at the beginning of 2019, when I recalled a memory of myself at my best friend’s house. We must have been in high school since I would occasionally go home with her after school. We performed magrieb together and I remember using her Prayer Mat, the one my Dadi had too!

It was at this point that I began my inquiry into this Prayer Mat. If a close friend of mine had this Prayer Mat, I wondered how many people had this same Prayer Mat? I had sent an image of the Prayer Mat into the Whatsapp group I share with some of my friends. To my surprise,  half of them said they had it and the other half said they recognized it, or had used it in the past. What stood out for me at this point was not only the fact that they were owners of this Prayer Mat, but the deep emotions and memories that they immediately felt and shared with me.

I extended my search a little wider and I had asked family and friends to share it on their Instagram, Facebook and Whatsapp networks. I was fortunate to have Voice of the Cape, a local Muslim community radio station, pick up on this trend and they shared it on their Instagram and Facebook page. The feedback was both overwhelming and exciting! I had received over 340 comments and even more likes and shares, literally overnight. I then used the different social media platforms to conduct an interactive oral history exercise and obtained feedback on issues of individual and collective memory. In my thesis I used the research I gathered to weave a narrative of memory, ritual, spirituality and belonging. Some memories were mundane childhood memories and others involved an element of fantasy. Other recurring themes in the comments included stories of faith, nostalgia and loss.

Many South Africans, as well as other international participants shared their fond memories and stories with me. I had received responses from people living in South Africa, Zambia, Zimbabwe, the United States of America, the United Kingdom, Malaysia, Saudi Arabia, Turkey, Australia, the United Arab Emirates.

At first it was difficult to track the life story of this Prayer Mat. However, I had come to know that this Prayer Mat was mass produced in India, Morocco Turkey and China. Many participants had stated that they recall this Prayer Mat having strong ties to the two pilgrimages of Umrah and Hajj. Either their parents or grandparents had used it and the children had inherited it from them or they had received it as a gift from the hujaaj. This explains why this Prayer Mat was no stranger in the homes of many Muslims. According to Saudi Artist, Sultan bin Fahad, many local merchants regarded this Prayer Mat as “the originals from Mecca.” 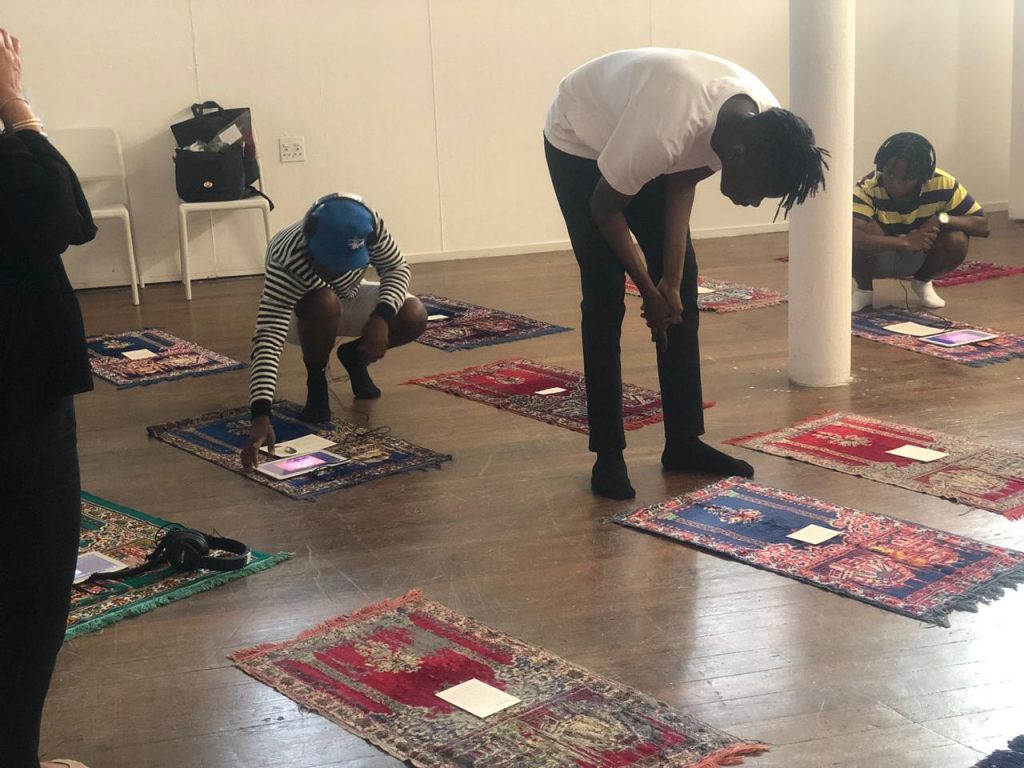 As part of my thesis I had to turn my research into a curated exhibition, which took place on the 11th November 2019. I had to transform an art studio into an exhibition space. I gathered 23 prayer mats from my Muslim community in Cape Town. Each prayer mat had a written or audio narrative of the owner of each Prayer Mat sharing a favorite memory of theirs.

The audience was encouraged to stand or sit on the Prayer Mat, and were asked to sacrifice their attention, body and time to each memory on a specific Prayer Mat. 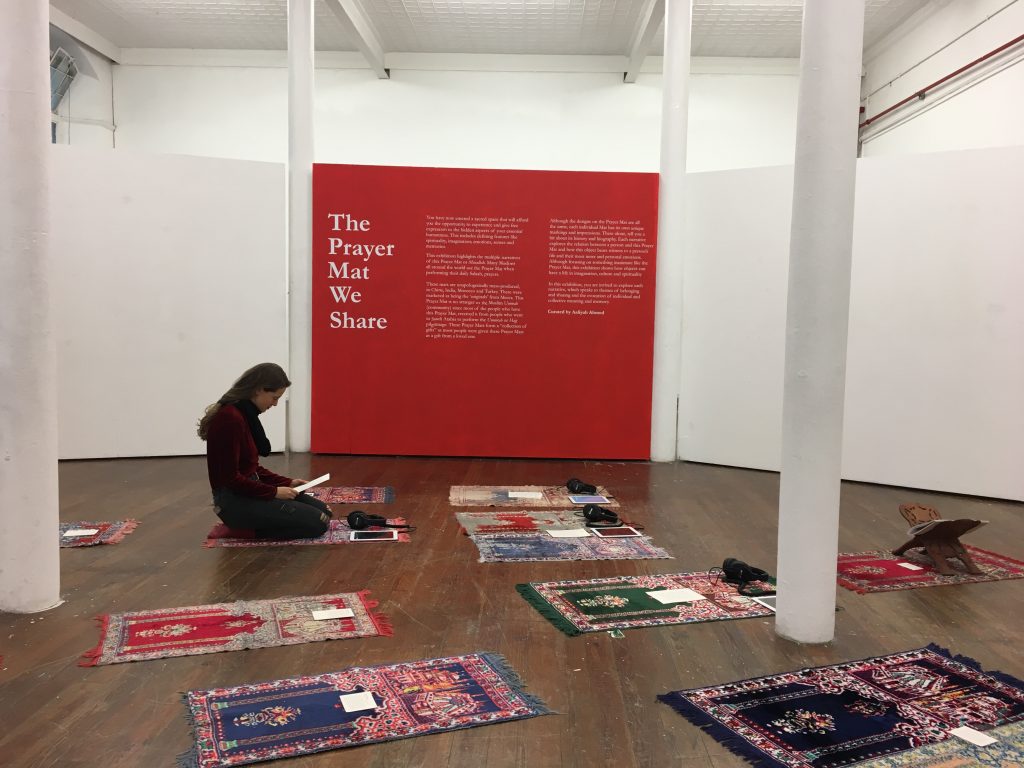 Since the life of an exhibition comes to an end when the exhibition is over, I wanted to continue the engagement beyond the exhibition. I created a website for the exhibition which contains all the data I collected through this project. The data includes comments, images and audio clips that people sent me over a  period of 8 months.

I invite you to have a look through this digital archive and share your own memory or picture of the Prayer Mat We Share by clicking here. 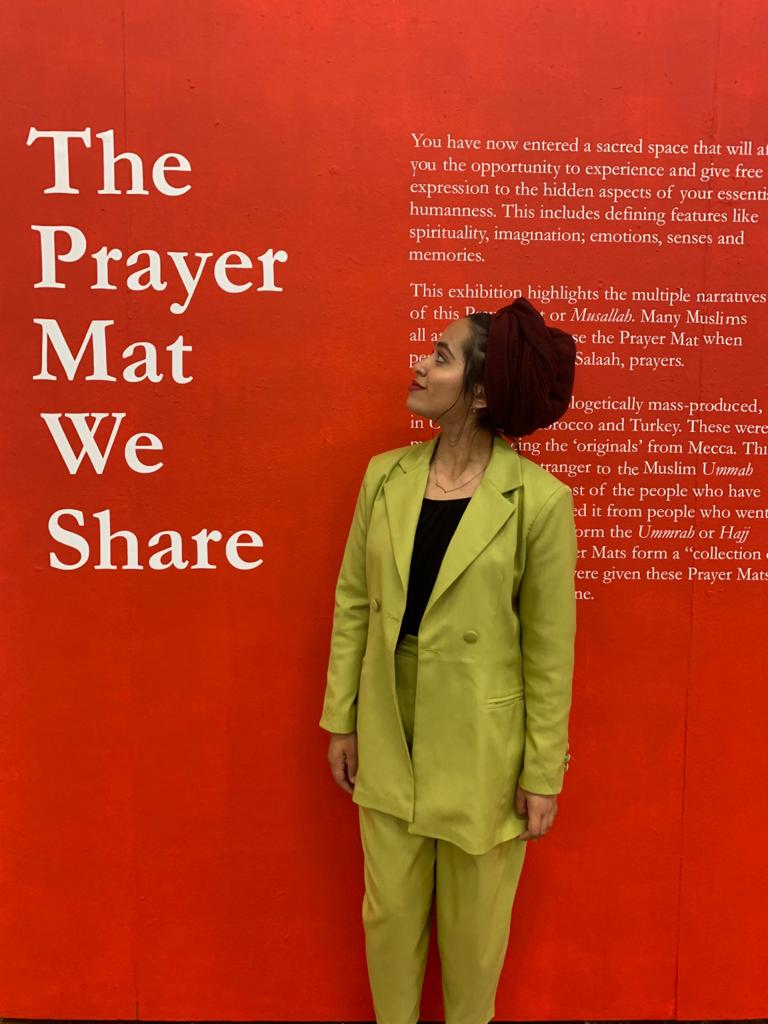 About the Author: Aaliyah Ahmed

Aaliyah is a budding visual anthropologist, who has an inquiring mind into all things extraordinary and mysterious. A keen eye that sees and finds the beauty in everything “ordinary”. She has an enduring love affair with the cities LA and London and just about everything in between. She is keen to inspire others to courageously cultivate unique styles that transcend conventional wisdom because it sucks anyway. She is a millennial who experiences true freedom in her faith. A CREATIVE PAR EXCELLENCE AALIYAH IS OUR IN HOUSE PHOTOGRAPHER, VIDEOGRAPHER, DESIGNER AND HEAD OF VISUAL CONTENT.