Hope In Action: An Interview with AMAL

Hope In Action: An Interview with AMAL

I arrive in Bo-Kaap, the historic Malay quarter situated above the city of Cape Town to meet with Ameen Habib, one of the co-founders of AMAL, a Non-Profit Organization focused on sustainable and holistic community development. Ameen is wearing an apron and sits at his newly opened café The Bo-Kaap Deli surrounded by people to discuss business and a market he is trying to establish. Another member of AMAL, acclaimed photographer Yasser Booley, is jotting down plans and a steady stream of people come in to buy coffees or simply to say hello. The atmosphere is jovial and is situated opposite a large building (another one of Ameen’s projects) which hosts young entrepreneurs and artisans such as Greeny’s Fruit Company and Isaac Sierra Jewelry. But it is AMAL I’m interested in learning more about, which began with a simple intention: feeding people.

“People were knocking on our doors for food everyday.” Ameen tells me. “With the lockdown we had more and more people knocking, for food and for work because they needed to put food on the table. And we thought we really needed to do something here, so we started cooking. We cooked the first day and it felt so good, so we did it the next day… and the next day, and the next day – we’ve just carried on.”

An estimated 6.5 million South Africans suffer from hunger daily and this has increased significantly as a result of COVID19 regulations. Now a registered NPO, AMAL cooks 100 liters of dhal and 100 liters of rice per day which feeds between 300 and 400 people. Caitlin Warther, an artist based in Bo-Kaap and member of the AMAL team, says “There are way more people who are hungry than anyone understands… for many this is their only meal for the day.” 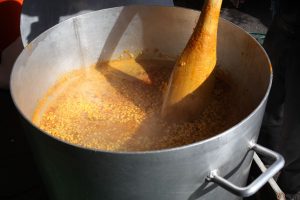 AMAL has been life-changing for all those involved and Ameen says that “With COVID19 and isolation, we were able to break free and start doing things.” While feeding people is the cornerstone of AMAL’s work, the team has greater projects in mind, such as a community market and community gardens. On the corner of Morris and Church street is a plot of land that Ameen and his family used for cooking in order to feed people on the days of Eid. “But people started using it as a dumping site. So we decided to put a  food garden here and we want to replicate this model on all open or unutilized urban sites in the area.” Opposite the garden, an elderly couple stand on the balcony of their pink house “As salamu alaykum, how you Uncle Hakie?” Ameen waves from the street below. 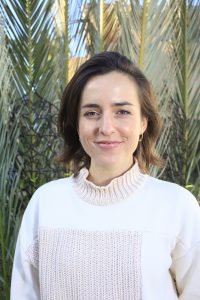 The idea is for all the neighbours to come together and work in the garden but is also part of a greater vision to raise money for AMAL and to ensure its continued existence. “We thought, well what if we could grow things, sell the produce and connect that money to the market place to create little circular economies” says Caitlin. “It needs to be sustainable because there are always going to be hungry people.”

The Bo-Kaap has also been the site of a struggle between developers and residents for a number of years and more recently complaints about the athaan (call to prayer) have enraged locals who argue that mosques have enjoyed the calling the athaan over the loud speaker for over 50 years. Bo-Kaap is also home to the Auwal Mosque – the first mosque established in South Africa, built in 1784 on land belonging to a freed slave. While the history of the area is rich and has resulted in an immense legacy, AMAL is positioning itself towards the future with plans to educate and empower the youth of the Bo-Kaap. Adjacent to where the cooking is done is an area where a madrassah will be established. “We want to teach the kids of the area,” Ameen explains “we need to give them some form of foundational training. And then we want to reintroduce the scouts and take the young people camping and outdoors”.

While the focus is undoubtedly the Bo-Kaap, Ameen says that “This is not limited to the people of the Bo-Kaap, we have people from outside coming in and assisting where they can”. Caitlin also explains that people wanting to get involved can help cook and help deliver the food. It is this human element that has encouraged many to donate their time and money to AMAL. “Generally, when people come and we show them what we’re doing, they are so willing to get involved. And then they meet Ameen, people see what he’s doing and know that he is trustworthy – that’s very important.” 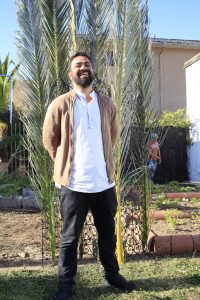 Throughout our conversation, however, it’s clear that Ameen eschews being a sort of ‘frontman’ and creating a hierarchy within the project, “AMAL is anybody and everybody that is willing to serve.” When I ask him about the name he explains that initially it was named after the Arabic word for action and the association amal has with the first Muslim community of Madinah. “But then we also heard that amal means aspiration and hope.”

It is clear that hope in action is what drives AMAL and its team members who are dynamic individuals with a desire to serve others. The team also hopes that their model will be replicated in other communities and they have even produced a video on how to cook dhal and rice. “The guys have made the recipe really tasty,” Caitlin tells me with a smile, “it’s delicious and nutritious!” Already, similar projects have kicked off in other neighborhoods in Cape Town such as Rondebosch and Lansdowne. Ameen says that the important thing is just to start. “In the beginning you do feel that it is hard, but ultimately it is not about you. The minute you take that first step, Allah takes ten steps to you and everything becomes easier. It just moves, it just goes, it just flows. Sometimes we don’t personally have money, but the feeding still goes on. The minute you run out of something, out of nowhere somebody comes along and there it is! This project isn’t mine, it’s not ours, it doesn’t belong to us. Once you start it, once you experience it, once you see the rahma (mercy) of Allah, once you see the blessings – you’ll never stop.” 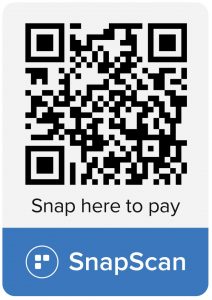 Content published from the Hikaayat desk by our fabulous team.