The Mystery of the Qur’an Sold for £7 million

The Mystery of the Qur’an Sold for £7 million

On 25 June 2020, Christie’s auction house in London made history. In their first in-person auction following the first set of pandemic lockdowns, they sold a Qur’an for £7 million – the highest price ever paid for a Qur’anic manuscript. This Qur’an likely belonged to a 15th century Timurid prince in present-day Iran or Afghanistan. The 534 folios that make up the manuscript are made from paper manufactured in Ming China. The folios are dyed in colours of deep blue, purple, pink, orange, green, turquoise and cream. According to experts, “The paper itself was made by a little-known process that infused lead white into the folios, resulting in a silky-soft and pliable page that would have enhanced the sensory experience of holding the Qur’an. Each page was further ornamented with gold, with many bearing shimmering images of trees and flowers in the sinuous Ming painting style.” The gold-flecked paper contained the surahs of the Qur’an in the naskh script and the thuluth script was used for title surahs and marking the thirty juz. 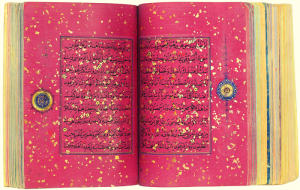 This Qur’an is a masterpiece. It is also believed to be one of only four ever created and this particular style tells the tale of “the rich history of diplomatic gift-giving and cultural exchange between the Persianate world and China”. The problem, however, lies in the manuscript’s provenance.

Art and artifacts have a long and often complex history and provenance refers to the history of the ownership and transmission of an object. All the information pertaining to an object such as which auction house or gallery has sold an item or whether or not it was part of a private or institutional collection is contained in an object’s provenance. Not only does a well-documented provenance increase the likelihood of an object’s authenticity, it also helps those who are demanding the return of their cultural heritage in the form of art and artifacts that were stolen as a result of colonial looting.

The controversy around the Timurid Qur’an began when Stephennie Mulder, associate professor of Islamic art and architecture at the University of Texas at Austin, posted a thread on Twitter raising provenance concerns two days before the auction. Together with her colleague, Yael Rice from Amherst College, Mulder emailed the Department of Islamic and Indian Art at Christie’s and was informed that the Qur’an was bought by the current vendor’s father in London in the 1980s. “Transparency about provenance ensures that the purchase of an object is not in violation of the 1954 Hague Convention or the 1970 Unesco Convention. Since this object apparently has no provenance prior to the 1980s, we can’t know anything about the context in which it was removed from its country of origin” said Mulder and Rice.

While these standards aimed at protecting cultural property the main problem with the Convention is that it does not apply retroactively. This means that objects that were stolen in the 19th and 20th centuries, primarily as a result of colonialism, are not covered by the Convention. There is no legal requirement that an item of cultural heritage must have a provenance traceable back to before 1970. A spokeswoman for Christie’s said that the Timurid Qur’an was part of the same collection for 40 years, “As included in the catalogue notes, a number of additional pages of this manuscript were made in the 19th century, likely in Central Asia. The paper of the manuscript was made in China in the late 14th or early 15th century and most pages of the manuscript were written in Persia in the 15th century. Manuscripts have historically been very personal and portable objects, frequently travelling with people across borders through time.” She added further that “It is hugely important to establish recent ownership and legal right to sell. Christie’s will not sell any work of art that we know or have reason to believe has been stolen or illegally exported from its country of origin.”

Yet the lack of transparency around provenance is common. Last year, Hobby Lobby filed a lawsuit against Christie’s for the sale of a Gilgamesh tablet alleged to be based on false provenance. The auction house was also forced to withdraw a group fo Greek and Roman artifacts after evidence was brought forward indicating that the objects came from sites with links to antiquities traffickers.

It is true that provenance has gained newfound importance in the art world, with Jean-Luc Martinez. director of the Musée du Louvre, stating that provenance is “undoubtedly the main question museums have to deal with in the coming years to maintain their credibility”. These comments were made when the Louvre recently put together a catalogue of almost all its works – previously the public only had listings to the works exhibited in the galleries. The Louvre also checked some two-thirds of the 13 943 works acquired between 1933 and 1945 for problematic provenance.

But when is provenance a problem? Erin Thompson, a professor of art crime at the City University of New York observes that “While it’s now common to denounce colonialism, belief in the superiority of colonising cultures still suffuses the views of cultural patrimony and artworks. Just compare the refusal of European museums to repatriate artifacts taken during colonial occupations to their very different approach to Nazi-looted art.”

Thompson explains that “The farther we get from Western Europe, the less morally compelling we seem to find the claims of those whose art Europeans looted. Crimes committed against Western Europeans, including victims of the Nazis, merit restitution and correction whenever possible. The Greeks have a certain standing through the legacy of classical society, but they are geographically and economically on the periphery of Europe. Their claims garner less consensus. Crimes committed against Africans, Asians and indigenous peoples are clearly different. Outside of small activist circles, their claims find very little support.”

So what of the Timurid Qur’an? Some sources suggested that it was headed for Saudi Arabia but Christie’s declined to comment. Does the fact that it may potentially land in Muslim hands cancel out the shady origins that got this Qur’an into the hands of private collectors in the first place?

The answer is not so simple and is also speculative seeing as we have no idea who the current owner of the Timurid Qur’an is. This manuscript of beauty and unsurpassed workmanship is also a reminder of the way in which traditional arts and culture were historically merged with the beauty of Islam. The written text was the unchanged Word of Allah and the calligraphy used is a well-known Arabic style that is easy to read. But the paper, the colour choices and illustrations are unmistakably unique to a specific region and time period. More importantly the fact that the manuscript was likely created in Shaohsing on the south-central coast of China and sent from a Chinese ruler as a gift to a Timurid prince is a sobering reminder that historical Sino-Muslim relations could not be further from the current Chinese regime’s imprisonment of millions of Uighur Muslims in concentration camps.

That such a manuscript remains in unknown hands and far from public view is disappointing and highlights the importance of restoring and making public objects and manuscripts that are part of our tradition. It is only through the preservation of such items that we may begin to get a clearer picture of our history and a clearer picture of the possibilities that lie ahead. 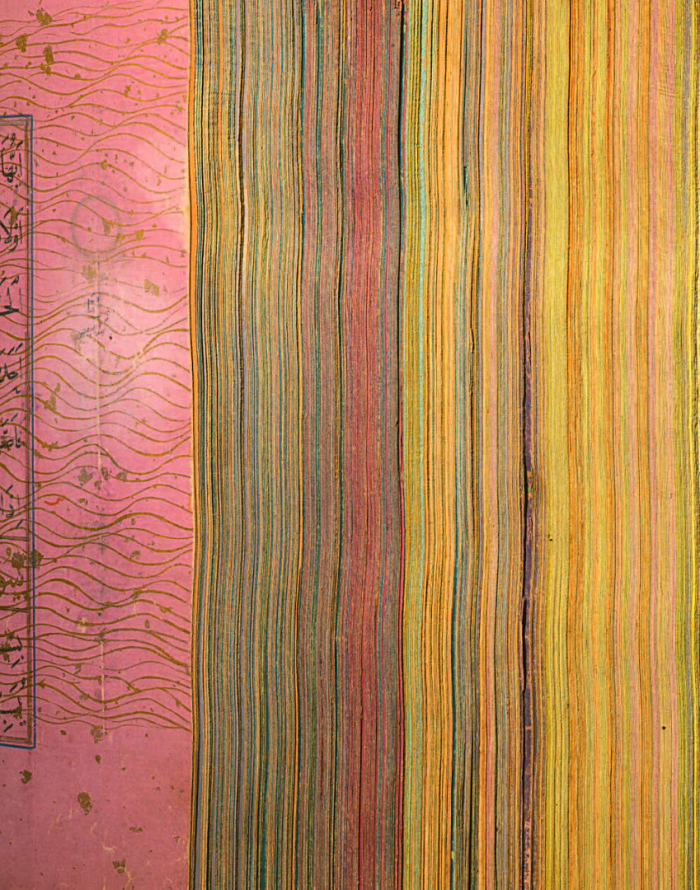 About the Author: Ibtisaam Ahmed

Ibtisaam holds law degrees from the University of Cape Town and Cornell University. She sings songs of nostalgia, is an avid baker and loves creating Instagram Polls. She believes in autonomy and free will as the key to finding truth and thinks justice is good but compassion is better. Currently doing legal research and freelance writing in New York, you can find her wandering in libraries and getting lost in Spotify. IN ADDITION TO BEING OUR LEGAL EAGLE, IBTISAAM SOURCES CONTENT AND FINDS AUTHORS AND COLLABORATORS.