Woman of the Week: Wafa Aouchiche

Woman of the Week: Wafa Aouchiche

Wafa Aouchiche is honest. Very honest. “The way I portray myself on Instagram is the exact same person I am in real life… And whatever I say to you, I could say right in front of my boss or the Prime Minister” she tells me during our interview. It is precisely this quality that makes her one of the most interesting voices within the English speaking Muslim world with nearly 30 000 followers on her personal page @wafa.salam.judas.

But the followers and numbers are not Wafa’s game, in fact she doesn’t consider herself an influencer at all. “Influencer? I don’t know. To me ‘influencer’ has a lot of negative connotations. The people doing that kind of thing don’t really bring much value to my life. I think it’s very shallow and tied to a consumerist society – whether its Muslim or non-Muslim, whether its hijabi or not.”

Wafa is the friend you wish you had – generous, smart and kind. Her face, which is framed by dark curls and a lone dreadlock, is open and she smiles and laughs a lot. Dressed at home in an orange djellaba and talking to me about Vybz Kartel, seems to be an accurate description of where the 33 year old finds herself as a Canadian woman of North African descent with a strong affinity to Jamaica – the place that kickstarted her tourism business, Burgundy Roots.

“My heritage is Berber. Berbers are the aboriginals of North Africa, they have their own culture, their own heritage, their own language. They accepted Islam but rejected Arab culture. In terms of that, I feel that they are very free spirited people and I think I get that energy from them for sure.” Born in Algeria, Wafa escaped civil war with her family and moved to Canada where she currently resides and is a teacher. 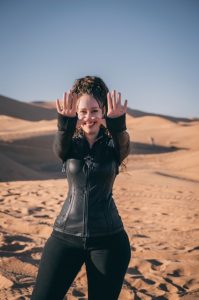 “Being born in Algeria and living there for the first eight or nine years of my life has really shaped my outlook on life. If I came to Canada any younger, I’d probably buy a lot more of the bullshit we’re being fed today. You know, this whole idea of ‘me as an individual and I’m at the center of everything’. That whole mentality is toxic. I know from experience that just because something feels good doesn’t mean it’s good for you.”

Yet added to this heritage is a layer of Western identity, she explains. “Being North American – it’s not just cultural connotations, it’s the music, it’s the expressions, it’s the sense of humour. It’s not ‘Oh you’re Western and denying your Eastern roots.’ No, it’s like we can all sit and watch Dave Chapelle and have a good laugh because that’s culturally relevant to us.”

Wafa’s ability to confidently juggle all these identities is rooted in her faith. “I feel Islam grounds me. I feel that wherever I am, I already know what to do, I know which direction to face to pray, and I know what needs to be done.”

Perhaps it is carrying all these multiplicities that made Wafa yearn to explore and travel extensively. Not long after her first solo trip to Peru, she traveled to Syria in search of learning Arabic and more about Islam, returning home to Canada a mere months before the outbreak of the civil war. “My time is Syria was blessed, I made a lot of friends along the way. Everyday was like a new day, I’d walk into a coffee shop and meet someone new.” While she describes Damascus as both a holy and beautiful city, “the most memorable thing was the people.” So much time and so many destinations have meant that for Wafa “It feels like a blur, I have to look at my old passports and check to see which years I traveled where!”

Given this obvious love of travel, was a sustainable tourism business always part of her plan? “If someone had asked me five years ago if I knew I was going to be doing retreats in Jamaica, I would have said ‘Not in the least!’ It was not part of the plan.” It was Wafa’s second trip to Jamaica, that changed her profoundly. “The feeling I got from that second trip, I wanted people to experience that with me.” So she posted a status on her Facebook asking if any women wanted to do a retreat in Jamaica. They met at the airport and it was this first group that encouraged Wafa to start her business. “I never thought it was a possibility,” she tells me, but each year her business grows. “We were always relying on local business, but I started meeting more people on the island and meeting more business owners. But this whole thing of sustainable tourism – I didn’t even think it would be an appealing concept.” The fact that so many Muslims signed up also came as something of surprise. “There is a big distinction between Muslim-friendly tourism and an Islamic retreat.” But even though Wafa’s tours are based on the former, “People have to have the correct energy” she says. Burgundy Roots also organizes curated vacations tailored to its customers’ specific needs, and like the retreats hosted by Wafa, “It’s not just an excursion, every day is an experience, every day is a vibe. You get both culture and nature everyday.”

Her work as a teacher also doesn’t end in the classroom as she explains that “During the retreats – you do a lot of teaching. I love those teaching moments.” It is precisely the learning inherent in travel which makes Wafa encourage everyone to travel. This ethos is reflected in the name of her business, Burgundy Roots. Roots are an obvious reference to the genre of Jamaican music, but there is more. “Burgundy is the colour of rebirth and roots also refer to the roots that ground you. So the idea is that you ground yourself in a universal experience while traveling to a foreign land, while still feeling like you’re establishing roots.”

Of course, a Muslim woman traveling on her own and organizing retreats in Jamaica is bound to raise some eyebrows. But Wafa says she hardly comes across haters and trolls, “Those comments come as a 1% of all the interaction I get online. I also don’t play into that. I don’t want to have this sob story that I took off my hijab and the whole world came crashing down on me. I think because I’m willing to take some heat, I don’t get any.”

And if she does get criticism, “I can’t get mad. I still have love.” There is a unique comfortability and perspective that Wafa has, once again rooted in her honesty and self-reflection. “We know about the ego and the dialogues that happen internally, but I don’t say that things are halal. I think its easier and you have such peace of mind when you don’t try and justify your wrongs. But if you can manage, follow a wrong action with a right action and do it sincerely.”

It is these kinds of candid conversations that made me follow Wafa, after much insisting from my friend (and fellow Hikaayat contributor), Ruqiyah Goldhawk. I openly tell Wafa that while I love her photos and thoughtful captions, it is the spicy topics she addresses on her Instagram stories that keep me engaging with her content – past topics have included halal dating, polygamy, drugs, gender and sexuality.

Wafa is not afraid to have controversial opinions and says “You have to dare being offensive sometimes. If you can’t say something, how do you even articulate that thought? What gets me is the pretending – we’re supposed to be our ‘authentic selves’, but only when it comes to our base desires. Not when it comes to thinking and debating on an emotional level, on an intellectual level, on a spiritual level.”

For example, she shuns the rigidity and authoritarian nature of cancel culture, “If we’re going to play it that way, I tell these people ‘I wish your whole life could be put on the record, every tweet, every single little thing you said and then you let me know.’”

Wafa is also critical of Muslims taking to the internet to speak on topics of the deen of which they have have no knowledge. “Ultimately, it’s all ego. And the reason people are so agitated about this is because they are desperately trying to legitimize their behavior within the Islamic framework and it’s not working. It’s just plenty of ego, and that’s when you suffer the most. People are trying so desperately to distort the deen. Why? What knowledge do you have to speak on this matter? It is not a light matter. We have no knowledge and then someone comes on Instagram and says ‘Well, this feels good.’ My question is that in a world that is so unbalanced, if this feels so good to you, what does that mean? Which you is speaking? Is it your desires? Is it your angry self? Is it your lustful self? But we don’t want to watch ourselves like that. We don’t recognize that there is a higher self and a lower self.”

It is this lack of recognition that allows for a false rhetoric of freedom. “Too much freedom results in captivity because you’re a captive to your self. You’re just going around in circles, you keep getting what you want and you’re still not satisfied, because there is no spiritual depth.” Similarly, a superficial ‘self-care’ is not the answer as Wafa explains, “I’m not caught up in this lifestyle of buying wellness. You see, you’re suffering from a spiritual thing and they want you to buy something ‘spiritual’ to feel better. But it’s the technology that is all around us that is depressing us. I think technology is messing with us. It’s affecting our thoughts, it’s affecting our emotions, it’s affecting our moods. It’s affecting major decisions in our lives and no one is talking about that.” 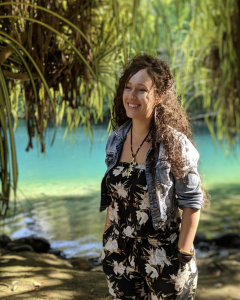 The fact that she is willing to traverse unpopular topics and travel to diverse places is exactly what keeps Wafa’s head above the water and she never falls into fatalism. This is because she places a high value on truth (“I think being truthful shows on your face”) but also relishes good vibes. Be that by not taking herself too seriously, planning her next trip to Colombia or sipping Algerian coffee with a touch of maple syrup. I ask Wafa what advice she would give to her 23 year old self in 2010, “You’re gonna do just fine. Just keep being sincere and truthful.”

By the time our lengthy conversation comes to an end, I tell Wafa that I would love to continue talking over a coffee or even take a trip with her to the spa, Ici Paris – which she so often raves about. Laughing, Wafa describes their facials and treatments, “It’s an investment for life! That and your Lululemon tights.” After our conversation I think about her explanation of her name “loyalty from the soul”, and it strikes me that Wafa is fiercely loyal – loyal to who she is.

About the Author: Ibtisaam Ahmed

Ibtisaam holds law degrees from the University of Cape Town and Cornell University. She sings songs of nostalgia, is an avid baker and loves creating Instagram Polls. She believes in autonomy and free will as the key to finding truth and thinks justice is good but compassion is better. Currently doing legal research and freelance writing in New York, you can find her wandering in libraries and getting lost in Spotify. IN ADDITION TO BEING OUR LEGAL EAGLE, IBTISAAM SOURCES CONTENT AND FINDS AUTHORS AND COLLABORATORS.